Fan website Axie.Tech has become the official community tooling partner for Axie Infinity. Axie.tech specializes in providing tools and resources for Axie players, scholars and managers to gain a competitive edge in the game, increasing their win rates and incomes.

One of the Axie.Tech’s main contributors, BestAxies took to twitter monday evening to announce the partnership. He stated that the Axie.Tech will be the tooling partner for Axie Infinity for the long term in at least a two-year period. They also revealed that Axie.Tech was given early access to the forthcoming Axie Origin update to be able to gather data and build tooling and guide content. 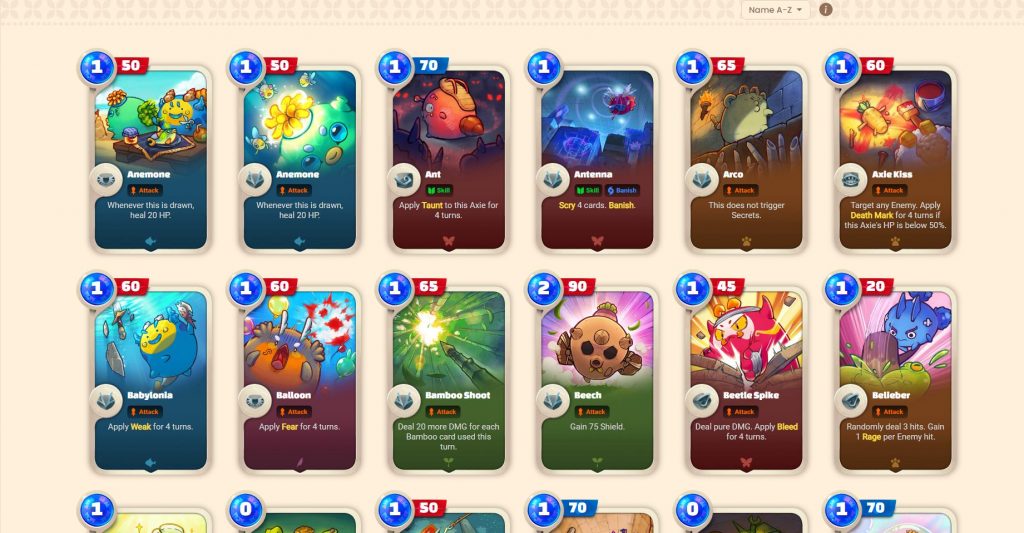 The website has recently released a card explorer for Axie Infinity Origin where players can view all the cards released for the game so far along with rule explanations when you mouse over certain terms in the game. Included in the card explorer list is the list of curses, tools, runes, charms, and status effects with explanations and clarifications on how things work.

The list is a great way for new and old Axie players to prepare for Axie Infinity Origin as it lists everything on the card explorer including all you need to be ready for the launch. The Axie.Tech database allows you to sort the cards based on alphabetical order, by damage, shield, heal, and energy.

As mentioned, scrolling over texts can bring up rule explanations as a pop-up. Clicking on the cards will tag it as a favorite which you can view on the favorite tab for easy look-up. You can also mouse over at the top right of the card which says V3->V2 and it will reveal to you the card equivalent in the current version 2 of the game so you get a better idea of how the card can work. 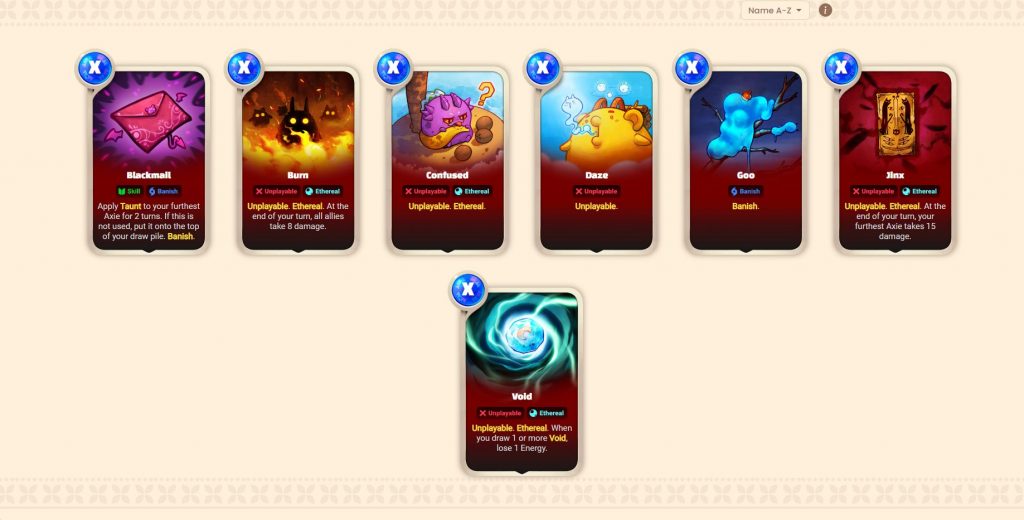 Interestingly, the card explorer also reveals to us a bunch of curses and tools that you may encounter in-game. In version 2, curses and tools did not exist as ability cards often just tacked on status effects directly on opponent Axies. However, in Origin, certain cards do not apply status effects directly but instead, either force a player to receive curses in the form of cards or tools that get added to the hand of the player.

Another curse card is Burn, which is shuffled into the draw deck of an opposing player whenever you play Hot Butt. In V2, the Hot Butt card was the Spicy Surprise and would disable the opponent’s mouth cards from being used. In Origin, however, the mechanics have changed and instead shuffles three Burn curse cards into the opponent’s draw pile. When they draw the card into their hand, they are unable to play the card and if they still have it at the end of the turn, all of their Axies get dealt 8 damage.

As for Tool cards, there are only three at the moment. These are token cards that get placed into your hand whenever their corresponding ability cards are played. Lumber Shields allow you to play them at 0 energy cost and gives 12 shield. Pure Water, gives a player 12 health for 0 energy cost while Strawberry gives a player 60 health for 0 energy cost. All of these tools have the retain ability which means you can keep them in your hand until you actually use them.

There is a lot of utility with the curse cards and the tool cards which make the game much more dynamic and strategic to play than ever before. With the Axie.Tech card explorer, players can really get ready and study all the cards available and see what are the best strategies that work for them.

Axie Infinity Origin is just days away before its initial launch happening on April 7, 2020. The launch was delayed a week due to a recent hack of the Ronin Network but all hands are on deck now and the hype is real.

In the past few days, we’ve had the charms and runes officially revealed as well as the official gameplay trailer becoming available which has had everyone really excited about what is to come.