Build up the land, gather and produce resources, fight monsters and so much more!

Axie Infinity’s Land feature, known as Lunacia have been kind of on the stale side since it was released in 2019. Last tuesday, Axie Infinity developer Sky Mavis went live on Twitch to discuss plans and changes coming to the Axie Infinity Land system. The livestream was hosted by Zyori of ZyoriTV and the discussion was headed by Philip La, Game Product Lead for Axie Infinity. 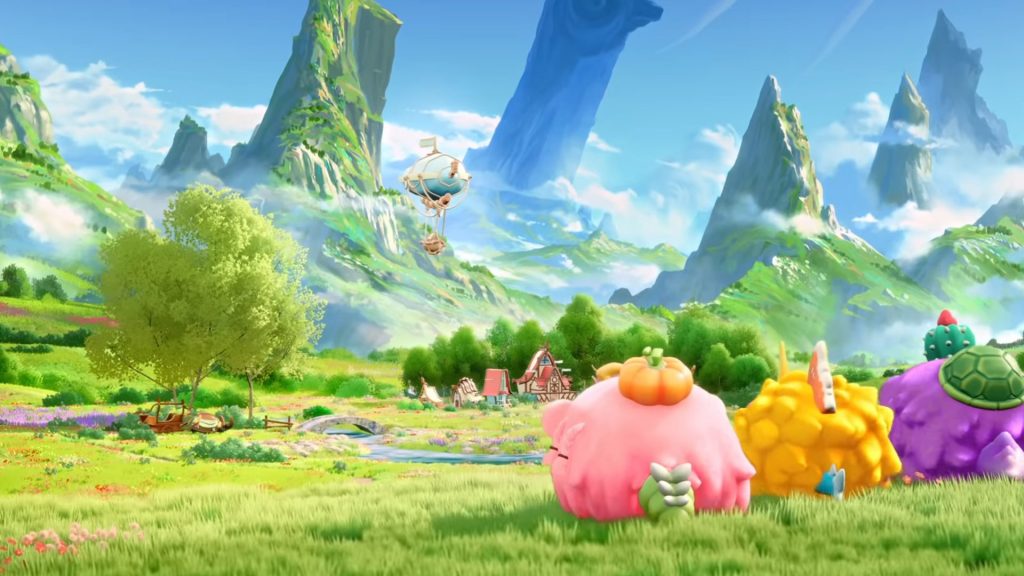 While there is some gameplay for Axie Infinity Lunacia and there is some footage online, it has mostly been bare with very little mechanics going on as of the moment. However, the design for the Lunacia Land game which is set to have an alpha launch this year, has always been separate from the main Axie Infinity game.

Before the actual presentation started, La gave a quick disclaimer that their discussion should not be taken as financial advice and that any development and updates are subject to change based on research, testing, community feedback, and other factors.

La began the discussion on what Axie Land is all about, specifically calling it a flagship first-party game inside the Axie Universe. The game boasts to be a combination of many game genres including simulation, real-time strategy, and role-playing. According to La, the Alpha launch will focus on building up one’s Land, and the goal is to create a brand new, social experience for players (called Lunacians) by leveraging the best that blockchain technology has to offer. 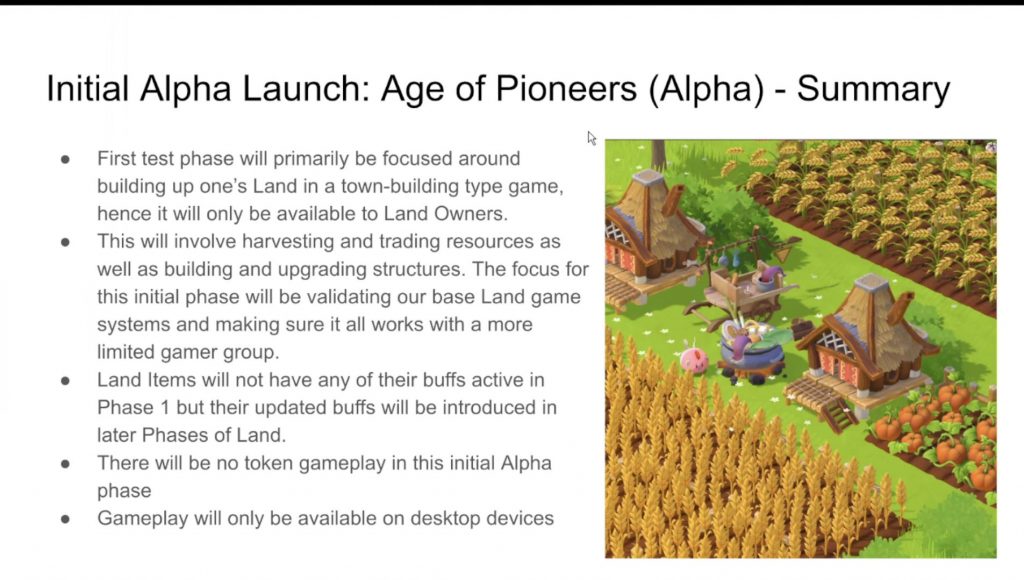 In the initial phase of the launch which they are calling the Age of Pioneers, the focus will be on building up land similar to a town or city-building simulation. There will be harvesting and trading of resources as well as upgrading structures similar to what you would see in many turn-based or real-time strategies. He states that gameplay will initially be restricted to desktop play and tokens will not be available at the initial Alpha launch.

As stated in previous blogposts, some of the gameplay elements involved will be the gathering of resources, the building of structures needed for production, the actual production process, crafting, player-to-player trading, and player-to-NPC trading will be included at the initial launch. All these elements will be used to give you an authentic town-building simulation experience making it a vastly different game from the classic Axie Infinity. La also shared that apart from Axies, there will be native Lunacians, which are NPCs that you can interact with along with the possibility of other races in the game.

As for Axies, there will be different kinds including the worker Axies. These Axies are made available to landowners and are used to build up their land and gather resources. These are, however, not NFTs. NFT Axies will be introduced later in the game for future features but will not be useable at launch.

Land Tiers and Their Benefits

Not all Land is created equal as there are different tiers of Land available such as Genesis, Mystic, Arctic, Forest, and Savannah. The higher tier lands will have more benefits to the landowner such as numerous buffs for gathering, producing, crafting, and building. Higher Tier Lands will also have exclusive materials available not found in other lands.

Luna’s Landing, which is found right smack in the middle of the entire map, is a unique area that according to La has not been finalized. He did say the team is open for feedback as what people would like that space to be but right now their ideas include exclusive dungeons or special events that may become available in the region.

Leaderboards and The Game Loop 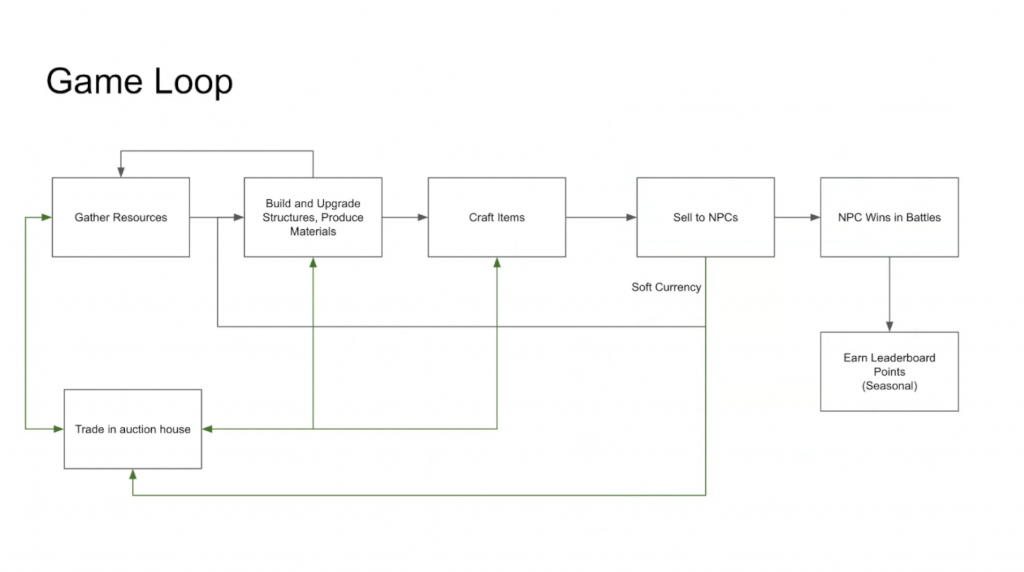 Land will also have leaderboards. These will be based on the monsters defeated by NPCs that landowners sell items to. The more monsters NPCs kill using your items, the more points you get. There will be seasonal leaderboards and rewards for top-ranked players as well.

La shares in his presentation what the game loop or ecosystem will look like. It’s still a very basic framework but they will be adding more features as they improve the game and get feedback from the community.

In the presentation, La explains that right now the plan is to incorporate AXS as part of the gameplay for Axie Land in future updates where there will be mechanics for players to earn AXS. However, La explained that there are currently no plans for SLP to be used in Land at the moment. This may change, however, depending on the direction of the game and community feedback.

To The Future and Beyond

La also discussed some future ideas for Land. He explains that these are very early and are subject to change, perhaps may not even hit the game itself depending on their direction.

Some ideas include having an Avatar Axie which players can use to walk across the Land; Free Properties which is basically land with limited utility that players can use to decorate, upgrade and even craft in; Dungeon Battles where players can send their Axies to go into dungeons and battle monsters; and Chimeras, Jobs, Services and Contracts to allow landowners to get other players to assist in their land development, and new NFT items that can be used either for utility or for cosmetic value.

La shares in the interview that they want people to experience the game even if they are not landowners especially since they know there are more players than there is actual land plots. La says, “We’re making sure that everyone in the Axie ecosystem can enjoy Land and have full gameplay in different ways.” He continues on to say that “giving everyone fun ways to interact with each other and just enjoy Land is a core part of the game.”

Zyori also brought up the SDK (Software Development Kit) for Axie Land which would allow the community to develop mods and tools for Axie land. La responded by saying that SDK is something that is further down the roadmap and they would like to focus first on the foundation of the game.

La shares that they will have the Alpha launch out before the end of this year with other features in the roadmap including earning potential being active by the following year.

For the latest news on Axie Infinity or other NFT games, check back with us as we report any new updates. In the meantime check out all the changes to arena mode and all the new keywords and card effects in Axie Infinity Origin