Nobody wants to get stuck with a crappy Hero.

The Thetan Arena team is starting the new year with a bang, as they release a huge update for the game.

Thetan Arena just launched one of the most-awaited features of the game alongside its Lunar New Year patch, Hero Rental. With this feature, Thetanians can now “rent” heroes. This gives players a chance to try the hero first before fully committing to buying it.

This feature incentivized its NFT holders and veteran players by lending their NFTs and heroes to casual or newer players in exchange for rewards. This will give the NFT holders a passive way of gaining without them playing the game. Basically, you can treat it as some sort of a scholarship scheme without the full commitment of both parties.

NFT owners can set their heroes up for rent in the marketplace so that renters can rent those heroes for them to use on their games. There are just some requirements you need to meet:

The rented hero will return to the owners when the renter used all of the available battles or the rent time was over. You can compute a hero’s rent time using this formula: 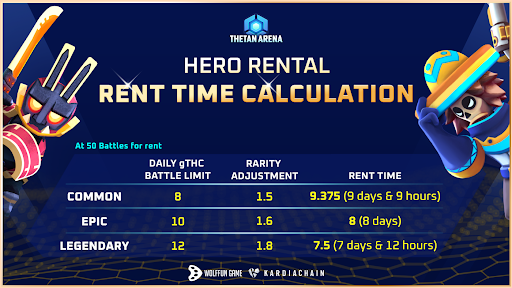 Here are some important notes:

Here’s the full guide on how to rent your hero prepared by the Thetan Arena team.