You too can become a hero (skin)!

Thetan Arena is aiming to empower their player with their new Unlock NFT Power Program. The new program seeks to utilize the power of customizable hero skins to allow players to express themselves better as well as brands, corporations and esports teams to increase their brand integration within the game.

Detailed in their online presentation, the Thetan Arena’s Unlock NFT Power feature will “ in the game’s in-game assets through the use of hero skins and other cosmetics”. The new program seems to be aimed at organizers and potential partners for Thetan Arena, and will presumably serve as a new way of utilizing in-game NFTs as a promotional or marketing tool.

With the Thetan’s Unlock NFT Power Program users and brands will be able to customize hero skins and cosmetics to align with the colors of their choosing. The program will also allow users to customize its characters to represent any NFT that they own! 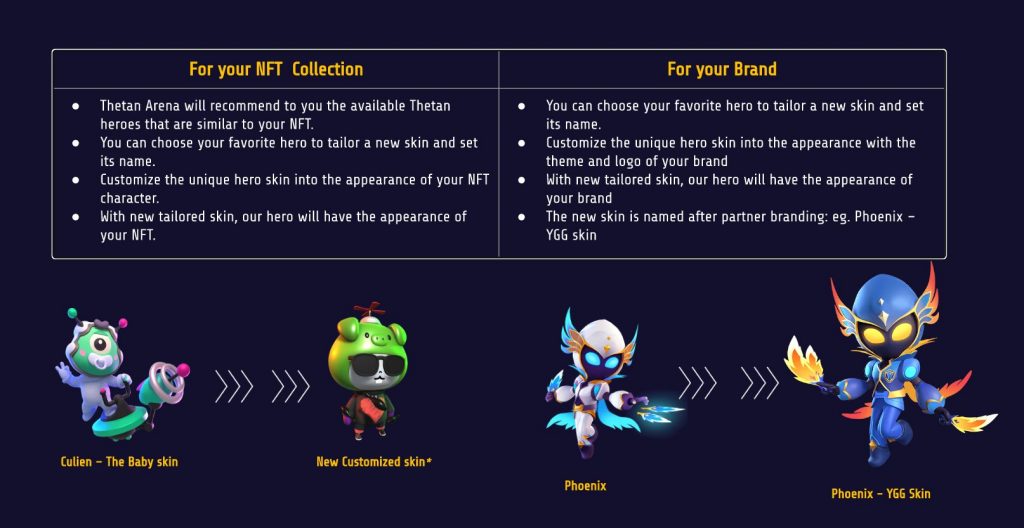 Such methods are not unheard of and other popular multiplayer games, particularly esports titles have been doing the same for years. One major example is Riot Games’ League of Legends who have been annually releasing a “Championship Skin ” in-game cosmetic line themed after the winners of their World Championships. These skins include logos and color schemes and even brand names on promotional material with one example being the Samsung Galaxy championship skin set for League of Legends released in 2018.

In addition to hero skins, Thetan Arena’s Unlock NFT Power will also cover other cosmetics such as emojis and in-game avatars. Designs for these custom assets will be provided by Thetan Arena’s partners and partnership sign-ups are already ongoing and done through a provided online form.

But how can brands really take advantage of this feature? As a MOBA, Thetan Arena holds a big potential to become an esport, an industry that is dominated by various marketing and brand promotional efforts. Using this feature would mean that brands would be able to directly promote their products in-game but in unobstructive ways as it uses hero cosmetics rather than traditional methods such as annoying pop-up ads. As these cosmetics will be used by NFT assets, the heroes, this program could also serve as an entry point for brands into NFTs and blockchains, and one that could have them dive deeper in the budding industry, building and increasing their blockchain presence and portfolio.