It's time to go big!

Big Time is an upcoming blockchain PC MMORPG where players team up to do adventures across time and space. The game features a “Timeline” mechanic or system which allows players to level up the same character in multiple class paths and switch to the desired class on the fly. That means a player can switch from one class to another without losing level progression. Big Time also includes a social aspect through a Time Machine feature that players can decorate and invite other players to visit. The game runs on the Ethereum blockchain. However, it also implements a proprietary Vault technology to help circumvent the high costs of Ethereum-based transactions. Still, in its Alpha phase, players must purchase or own an access pass to play. There is no news yet, though, if the game will have a free-to-play option on launch.

Big Time’s core gameplay centers on the action RPG approach to games. Players can use a variety of character classes, each with their unique abilities and as well as weapons to fit their playstyle. These classes include:

Each class has its skill tree that players can use to customize their gameplay experience further. Players can also use a pocketwatch item to change from one class to another without losing progression. You can loot pocketwatch items from enemies encountered in the universe of Big Time.

Big Time’s gameplay revolves around player versus enemy (PVE) and the co-op experience. Players will party up to take on quests, raid bosses, and clear dungeons. The dungeons are also procedurally generated, meaning that no dungeon instance is the same for each player.

In Big Time, NFTs include the SPACE NFT, armor and weapon pieces, and loot boxes.

The Big Time development team also plans to deploy their in-game token. The function of the token is still not announced as of now. However, we do know that to farm Big Time’s token, and players must own a SPACE NFT and the hourglass item.

Big Time is currently on Early Access with four playable character classes and the core or base gameplay features. These features include skill trees, boss fights, and procedurally generated dungeons. Soon, Big Time aims to launch an expansion of player time machines and time machine features. These features include the time warden, forge, armory, and even decorative loot drops. Story missions are also coming to Big Time, helping uncover the mysteries of its universe. 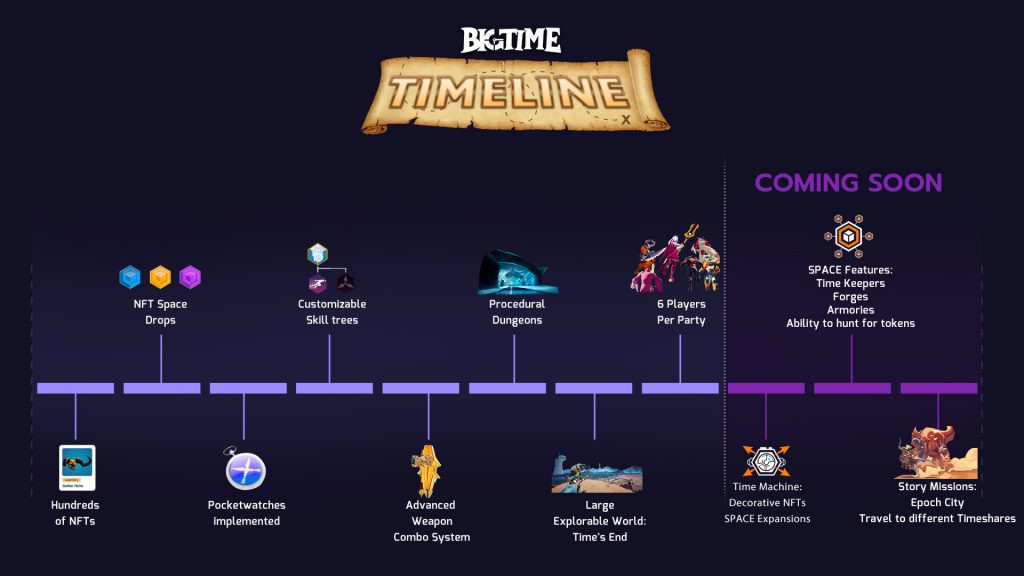