From registration to playtime we’ll find out what its like to play Origins for the first time!

Axie Infinity Origin has officially launched its Alpha phase on the desktop and we decided to take a look at the game and find out what makes it tick. These are our first impressions.

Axie Infinity is a blockchain-enabled NFT game initially introduced in 2018 and gained wide popularity during the pandemic of 2020 as an alternate source of income because of its play-to-earn model. Players can control a bunch of NFTs called Axies in-game and battle other players for rewards that can be converted into real-world cash. Origin is the third version of the game and promises many new exciting features. 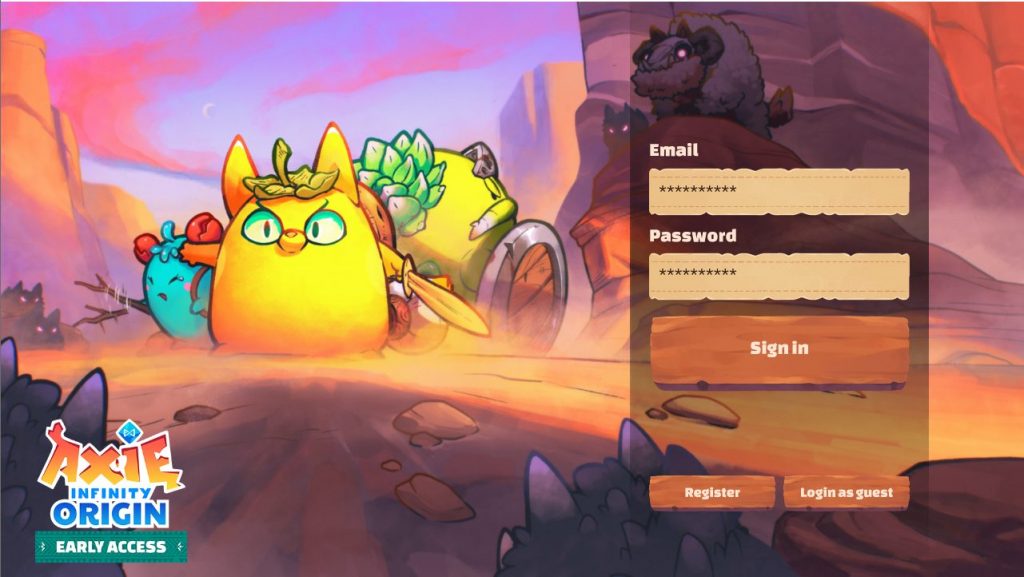 Axie Infinity Origin is currently available only on the desktop through Mavis Hub. Here you can download and install the game client which should only take you a couple of minutes. This will bring you to the login screen where you need to enter your email address and password. For obvious reasons, we suggest you enter your existing email address and password for your Axie account to continue, though the game also allows you to log in as a guest.

As this is your first time logging in, it will say that you don’t have an account and if you’d like to register. You can then later sync your existing Axie Infinity account to the new Origin account quite easily. The game will then download a few more components before the game starts. 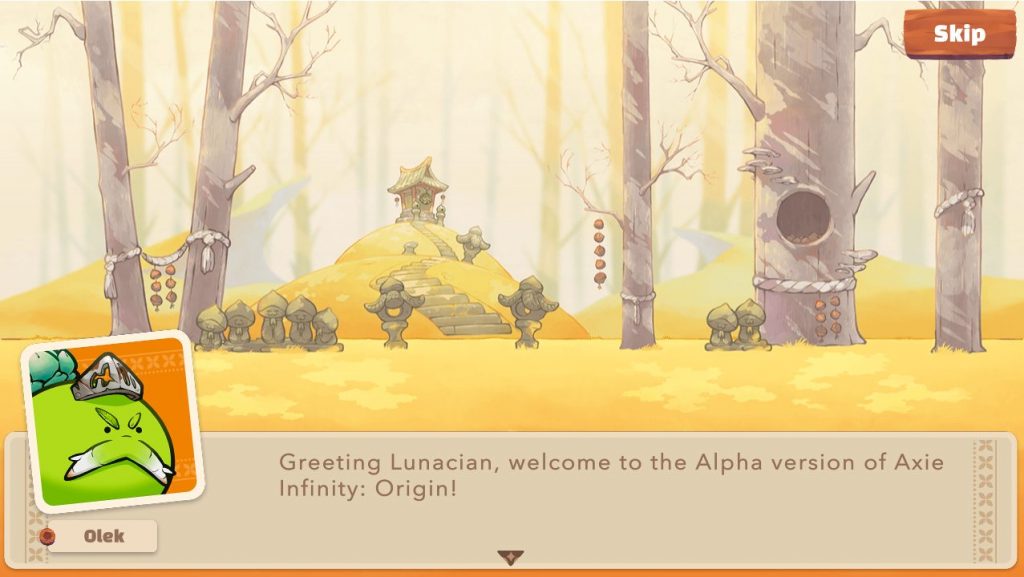 At the start, you will be greeted by Olek, an elderly Axie, which will be your guide at the start of this game. I appreciate this because it gives the game more of a story element. Think of how you’re greeted by Professor Oak at the start of a Pokemon game. Olek advises you that what you see in-game may still change but that they would value any feedback the team can get to help improve the game. Conveniently, there is a “Skip” button on the upper right of the screen should you wish to skip all that.

Once you are done talking to Olek, you will be brought into the main lobby of the game similar to what you would see in Axie Infinity. You will automatically be asked if you wish to go through the Battle Tutorial. While you can skip this section, we highly recommend you go through it as there have been many changes in the battle mode from version 2 of Axie to Origin.

The Battle tutorial will give you a feel for the battles, teach you the different phases and turns in a battle, introduce you to cards and card abilities and how they work, and even how to see what cards are available to your opponent. It’s a nice way to dip into the game without feeling lost.

In fact, everything from going through Adventure Mode, to syncing Axies, to making teams and even understanding how runes and charms work are all covered in the tutorials so we recommend don’t skip any of the tutorials in-game. And what’s amazing is that if you need to go through the Tutorials one more time, there is usually a replay button on the upper right to replay the tutorial. 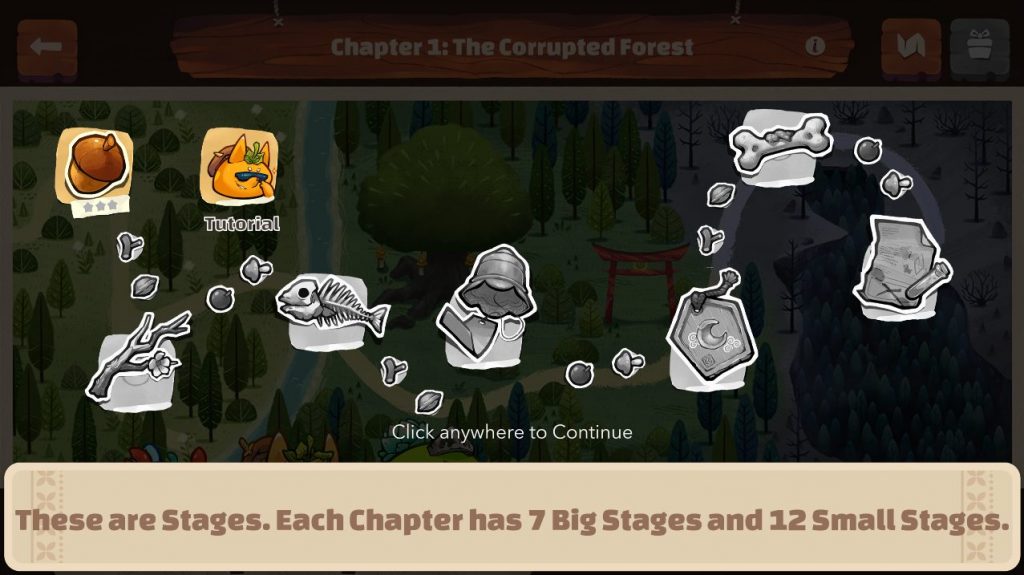 The game takes its time to meticulously introduce you to all the elements of the game without overwhelming you by allowing you to unlock features in the game as you progress through the initial tutorials. This makes it easy for any player, new or old, to grasp the finer elements of the game while not overloading you with too much information.

You gain experience points as you battle in the Adventure mode which then unlocks features in the game such as being able to view and sync your Axies, create Axie teams, use runes and charms, and even how to craft items in-game. So by the time the new feature is unlocked, the game should have sufficiently taught you enough and made you comfortable with current mechanics before moving on to the next. While you can skip the tutorials, most that do find themselves at a loss at what to do next in the game so we highly recommend you go through it. 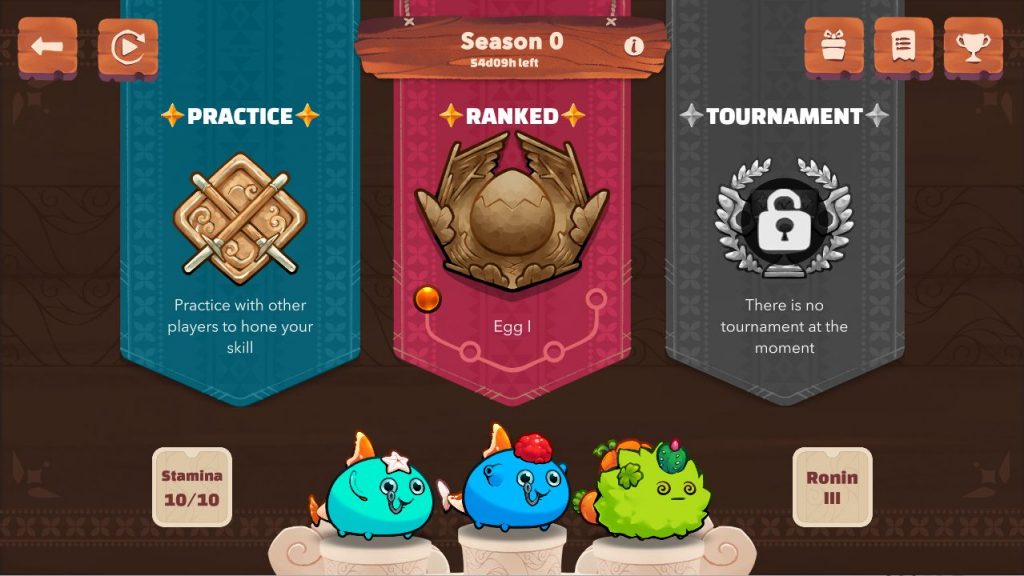 At first, the game only allows you Adventure Mode where you get to familiarize yourself with battle mechanics fighting against the game. The Adventure Mode comes with 7 main missions and 12 side missions for you to take and complete. They act as a story mode for the game and introduce you to the different characters of the game.

The smaller missions are not repeatable and can only be progressed through winning. Each section in the Adventure Mode corresponds to rewards including unlocking features. 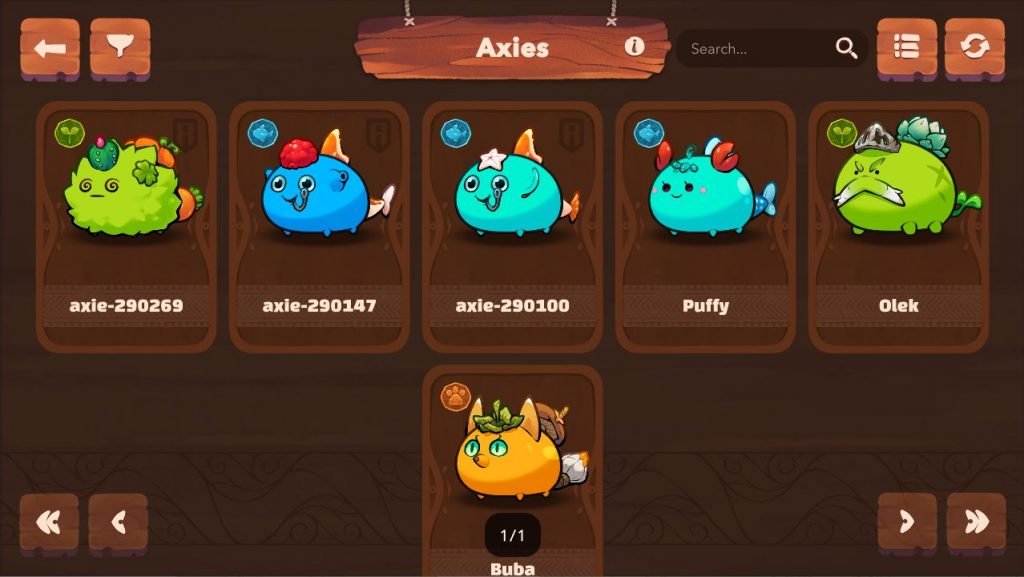 New to the game and don’t have Axies yet to play? Not a problem. As the Adventure Mode is like a Story Mode, you do actually start with three starter Axies. Starter Axies include Olek, the Plant Axie introduced at the opening of the game; Puffy, an Aqua Axie; and Buba, a beast Axie. You will encounter one more starter Axie as you progress through the story which you can also use in your team. For now, I will let you discover who that Axie is.

Once you have gone through enough chapters in Adventure Mode, you will unlock the Arena which allows for PVP battles. Here you can use the starter Axies you were given or you can use your existing Axies in your account. Simply make sure to sync your Axies in the Axie section of the lobby and create a team using those Axies. As explained in our discussion on changes in the Arena Mode, there are more benefits to using your personal Axies over the starters you are given.

Arena Mode will initially unlock the Practice Mode but will allow you to do Ranked matches at a later time. Practice mode allows you to play against other Axies and see how your Axie can fare in a battle. Here you can test out cards and builds as most of your opponents are bots and if you do encounter another player, there won’t be any penalties for losing. 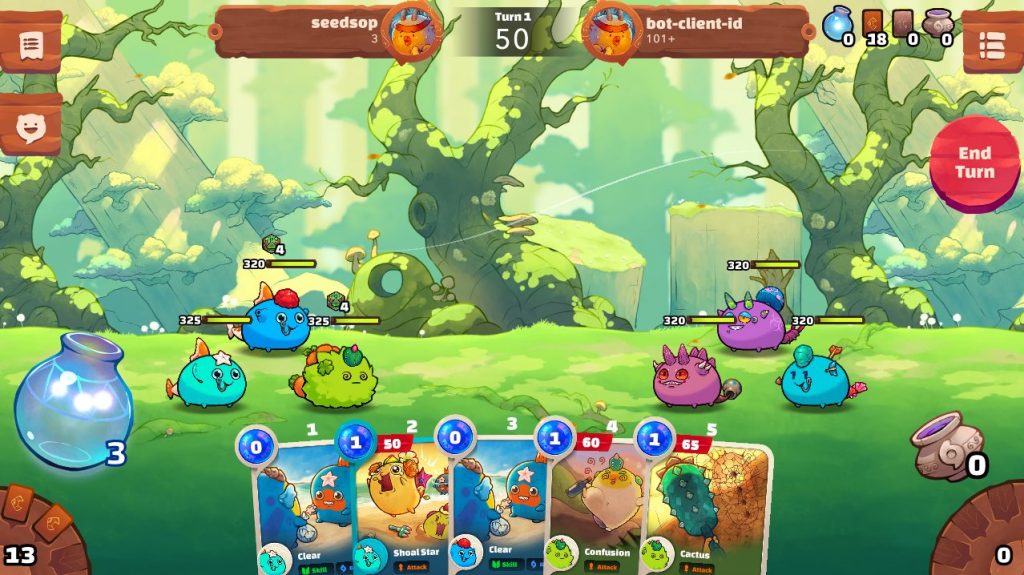 The battle system has been overhauled quite a bit from version 2 so you will need to make sure to go through the tutorial so you can get a hang of it. Instead of Axies’ actions being dependent on their speed, games are played in turns with one player using all their energy up to play cards before the turn moves to the opposing player.

Card abilities activate immediately upon playing a card, quite unlike version 2 of Axie, so you need to think first before you play the card. Card sequence is also quite important as there are abilities that activate depending on whether it’s the first card you play or not. Some abilities also combo with other abilities so it’s important which one to use first so you can maximize your turn.

However, you cannot take too long on deciding what cards to play as you only have 45 seconds to decide on which cards to play. Once the 45 seconds are up, your turn automatically ends, and the turn starts for your opponent. Trust us when we say your turn goes by faster than you know it, so you need to decide quickly. If you run out of time twice without playing any cards, you will only have 10 seconds in your next turn to play cards or you will automatically forfeit the game. We ran out of time in our first few battles that we also got hit by the auto-defeat penalty. I do hope that the developers will consider lengthening the turn timer so there’s more breathing room to think and decide on plays in the game.

Personally, though, games seem more fun and dynamic. You need to be more aware of different statuses and combos. The use of runes and charms is also quite important and can affect your gameplay immensely. One rune I’ve been using is a potion that gives health at the end of every turn which is great to keep Axies alive a little longer and harder to kill. 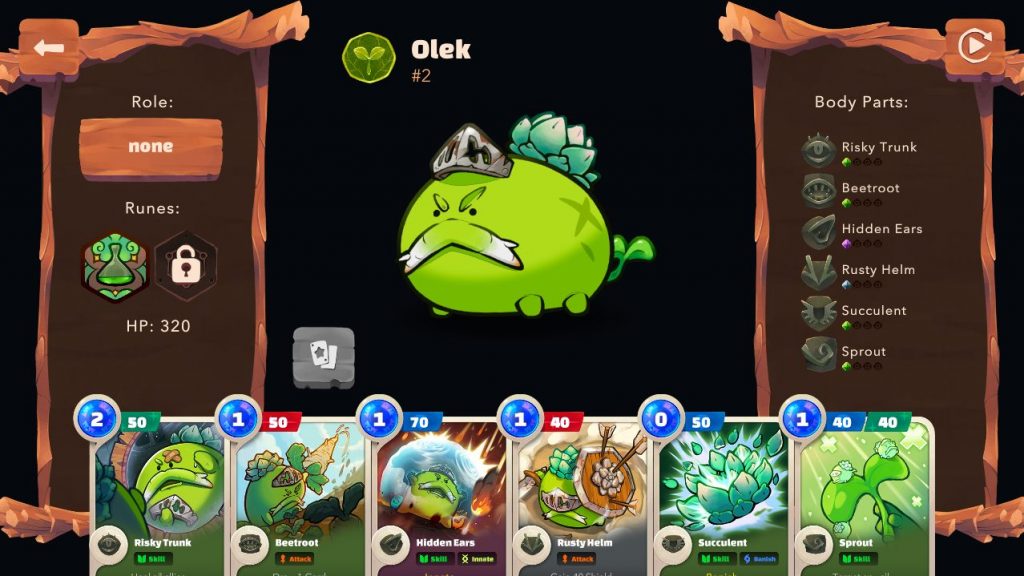 The graphics and user interface of the game are definitely an upgrade from version 2. The graphics are more colorful and lively, the animations are smooth and seamless, the backgrounds look much more beautiful than before, and the art style including the Axie designs looks just more pretty to look at and feel like have more character than before. You can stare at the art style and the graphics of this game and not get bored making it feel more like a premium game now than it was in version 2.

The User Interface retains a similar look and feel as you had in version 2 but is a lot smoother and cleaner. Buttons are not hard to miss and pop more on the screen than before. Transitions between sections of the game also seem a lot smoother and very responsive with no visible lag unlike in version 2. Once you click on a button it brings you to the next section right away with no hassle. The UI is also easy to navigate and allows you to enter any section of the game quite easily 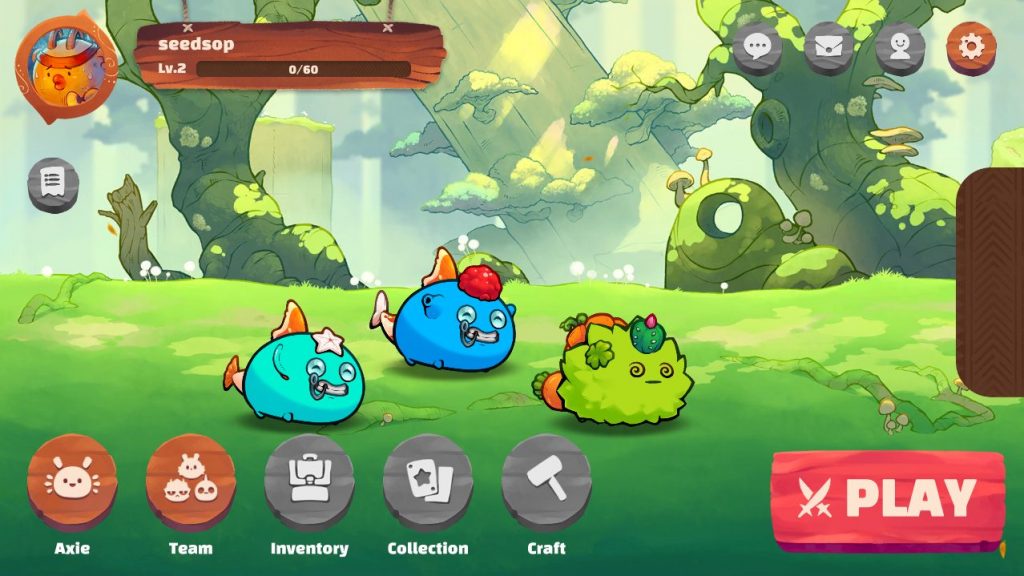 Axie Infinity Origin is definitely a worthy successor to the original Axie Infinity. I can say that the game is much cleaner, more beautiful to look at, smoother, and has better and more strategic gameplay than classic Axie Infinity. The addition of the story in the Adventure mode was a nice touch and will appeal to those who love RPGs.

Obviously, there are still many facets of the game that is yet to be activated and there needs to be fine-tuning in some of the features before it’s ready for a complete launch like the turn timer which honestly felt buggy at first. The game, however, is on the right track and we’re excited to what it holds for the future of Axie Infinity and play-to-earn games in general.

Overall, the game does live up to its hype and with the right community participation and feedback, we are seeing the makings of a play-to-earn game that can really make it into mainstream gaming. Time will tell.

Check out more of our Axie Infinity coverage like every new keyword and card effect explained and a more in-depth look at how Arena mode has changed!